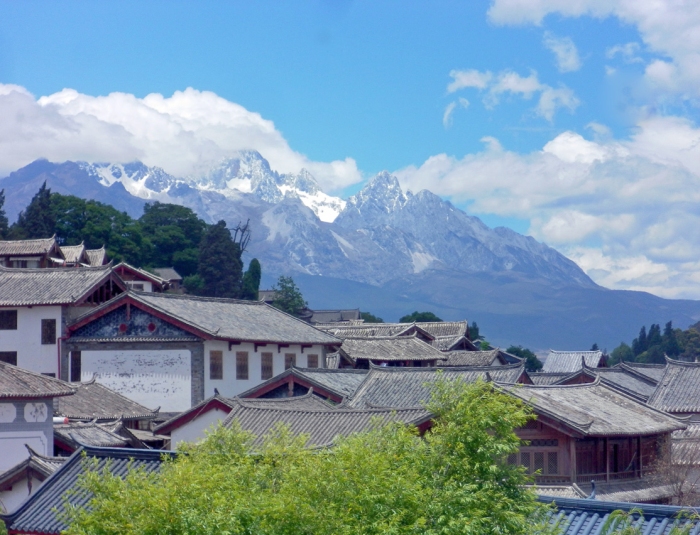 Lijiang has been on my radar for so long I feared it would have been overrun by tourists by now. A Unesco world heritage site, home of the matriarchal Naxi people (who still use the only functioning hieroglyphic language in the world), nestled at the foot of mountains that would grow up to be the Himalayas. How could it be anything but touristic?

But we went anyway. We knew the old wooden buildings would be there, Unesco wouldn’t be wrong about that, and the natural landscape. We braced ourselves to not mind the crowds: in post-modern China, with its swelling middle classes, there are people everywhere.

Arriving early on a week day, we dropped our bags at the guesthouse and prowled cautiously towards the centre of town, like new cats, along the stone road. No cars in the Unesco old town, just foot traffic, hand carts and the odd electric scootery delivery thing.

A foot traffic town sounds different. At first things were fairly quiet as many of the shops were still closed, but the murmur of the crowds increased as we moved inward, and typical Lijiang sounds became more frequent: the steady high clanging of the silver workers making bangles, the rushing of the little streams that cross-cross the town (Lijiang is saved from being called the Venice of the East because Suzhou already has this crown). The clickety-clack of wheeled suitcases on the flag stones, the soft beat of bongo drums.

Bongo drums? Seems so. I asked L-L, the young woman running our guest house (a blow-in from the eastern provinces herself) about this. Were these traditional instruments of Lijiang? “Yes”, she answered definitively. Then she added: “In Lijiang, there are many drum shops. All of them have pretty girls. When the pretty girls play the drums, many people want to buy them.”

Indeed, bongos were ubiquitous, but so were many of the wares, designed to lure tourists. It was monotonous, but rather fascinating: bongo shop, tea shop, clothes store. Silversmith, bongo shop, tea-horse bell shop. Scarf shop, handmade shoe shop, paper shop, bongo shop. No one in the old town seemed to need to buy anything else. And all of the bongo shops had pretty girls playing gamely, most of them trying to play this song:

Apparently this is a hit song by a local band*; we heard it constantly. I can’t think of Lijiang without hearing this sound track now.

The visual track of Lijiang soon became familiar, as we learned to recognise local symbols and motifs. Naxi hieroglyphics appeared frequently, on menus, silver bangles, handmade Lijiang paper, walls, scarves. Also the round flat bricks of pu’er tea, wrapped in white paper, about the size of Peking Duck pancakes. Pu’er is a true fermented tea, improving with age (20-30 years is good, but apparently it won’t get any better after the first 100 years). It used to be transported to Tibet and India across the world’s highest mountain ranges, and it is said that the sweat from the pack animals (horses, mules, humans), absorbed into the tea over months of arduous mountain travel, improved the flavour.

The tea-horse road was important for centuries: tea going out, horses coming in. Nowadays it is a hiking trail for the gung-ho, or you might do a section on a gentle afternoon ride, on small patient horses led by local guides. This was more the speed of the tourist hordes: we saw dozens of girls gamely climbing into the saddles, inappropriately dressed in hand embroidered sandals and gauzy skirts.

After just a little while, looking down at the main square from a cafe in the loft of one of the traditional wooden houses, we began to identify the Lijiang Girl. There she goes, slowly drifting past the shops to the rhythm of the drums, wearing a colourful skirt and a loose cotton blouse. Her hair is flowing, highlighted by tiny plaits woven with neon threads, in yellow, pink, green and purple. She wears a headband too, with a jewelled ornament (or at least a sparkly bit of glass) in the centre of her forehead. Long, brightly coloured tassels or feathers hang from her ears, silver bangles adorn her slender arms. Draped over her shoulders is another gorgeous swathe of colour: a highly detailed cotton shawl, made locally, or pretending to be. 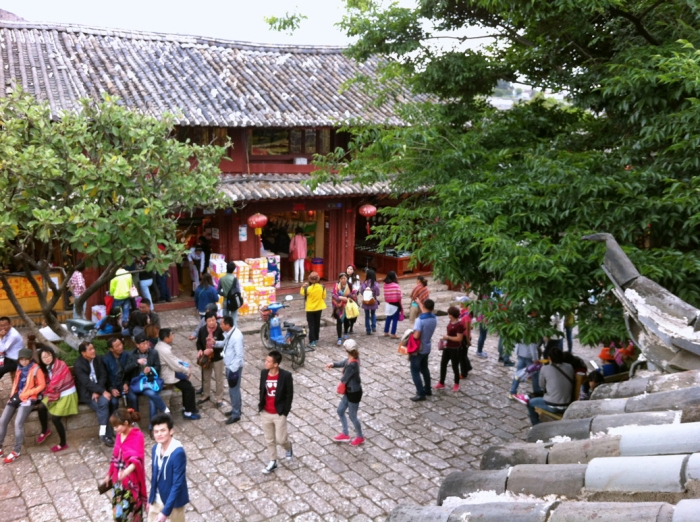 She is new China. Affluent, independent, worldly and educated, she has slipped away from her high pressure job in the east of China to literally let her hair down, seeking romance, trinkets, experience, and maybe bongo lessons.

These young women get good jobs and earn well. But find themselves suddenly 30+ and unable to find young men to match them. And so they spend their money on clothes and holidays, and search for…otherness. In a town full of artists, musicians and white bone spirits, it is no surprise to learn than that Lijiang has the highest rate of one night stands in China.

I can imagine how Lijiang might have looked years ago, when the splendid, outlandish  places of China were the domain of western travellers – they had money to squander on adventure. The wooden houses would have been there, more dilapidated, the streams less clean, the stone streets more pitted. The Jade Dragon Snow Mountain would have risen above the Dragon Pool, just as it does now, but remote and unreachable to most (now there’s a cable car that will take you up 4500 metres in a trice). The Naxi would have run the town. Western tourists would have arrived after long journeys on boneshaking buses, seeking the Real China, loving to photograph the Naxi in their typical blue dyed costumes. Eating local food, but resorting occasionally to banana-chocolate pancakes and coffee, because there are always purveyors of these on back-packer trails. 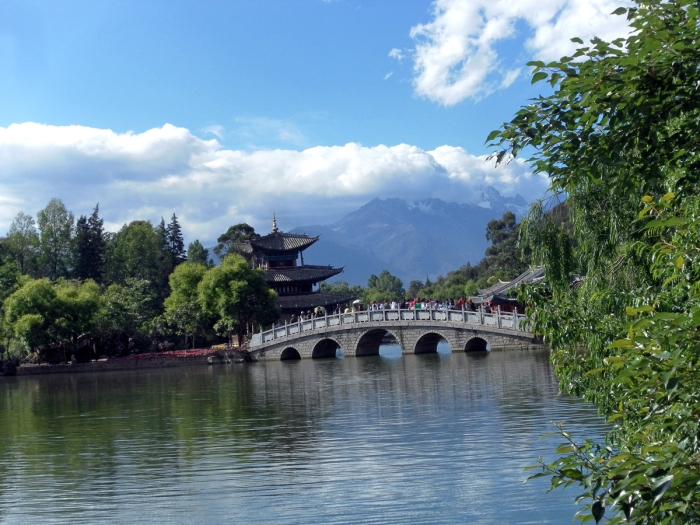 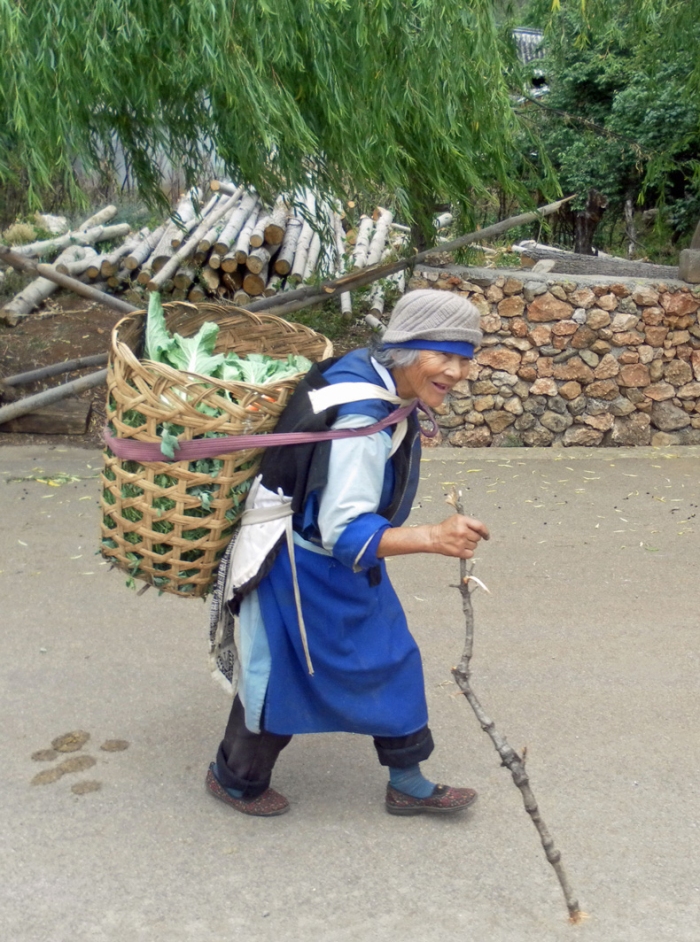 I’ve heard a few old China hands declaring that Lijiang is ruined now, nothing but a tourist town. Many of the Naxi have left – they can’t afford the rents. They’ve retreated to smaller towns nearby, that the white bone spirits don’t have time to visit yet. Are these towns the “Real China” now? Yes, but only part of the Real China.

The Chinese tourists, wrapped in red padded ski jackets rolling in the snow and sucking on cans of oxygen on Jade Dragon Snow Mountain are real. And the young women clad in faux traditional costumes posing for quasi-professional photographers – private shoots in public places – are real too. The female executive, gazing at the long haired musician with the Lennon glasses in a tiny backstreet nightclub…real. China. Global, urbane, ultra-modern, ultra-historical China. 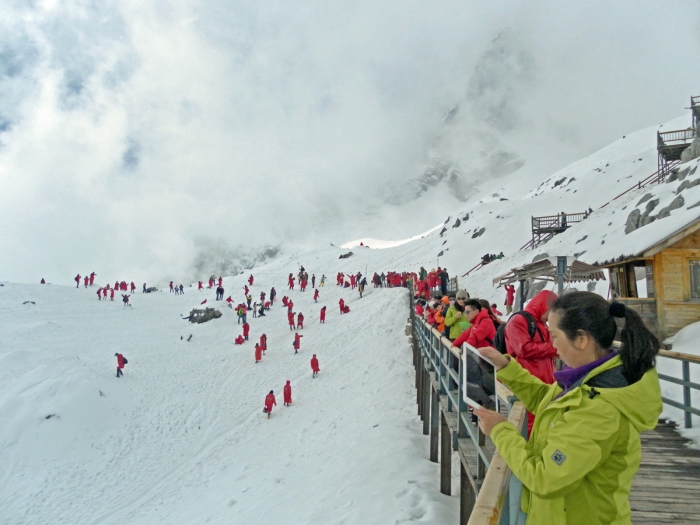 There is a well in the main street of Lijiang, where the Mongol hordes stopped to water their horses before driving on to ravish the rest of Asia. There is a sign describing this, though no one takes much notice – they are too busy shopping. But it is there, preserved, because the tourists come, keeping the town alive with their various hungers. Music and trinkets, tea and horses, a shiver of exotic love and adventure.

Surely the Khan’s hordes marched west to the sound of drums.